It occurs to me that I never really wrote about my Ergodox Infinity keyboard on here. I got it from Massdrop back in October 2016, as a kit with Cherry MX Clear switches and the additional flat plastic wrist rests.

This was my second mechanical keyboard after the Tex Beetle. It is a kind-of-ortholinear split keyboard design, of course released as completely free open-source hardware and software.

In June 2017 I replaced most of the included clear keycaps with a side-lit ABS keycap set, also from Massdrop. But some keys are from other novelty keycap sets, I don't remember where I got these.

Some time around 2020 or 2021 I also 3D printed the "Infinity Ergodox Ergonomic Stand" by rubenhak and I'm pretty happy with it.

Now on to the actual issue that triggered this blog post. Shortly after adding the tented base I had a little accident with a drink spilled over the keyboard. Unfortunately it was a sticky sugary drink and it managed to get into a bunch of the switches. The sugar acted like glue and the keyboard was no longer usable.

I left it on the healing bench for a while, but this didn't help much 😅

Because of the aluminium plate design, properly cleaning the keys requires desoldering them. It's not a real problem, it's just busy work that takes some time. But I finally found the motivation to do it.

First I had to remove the keys that were sticky and clean all residue from the plate. Back when assembling the keyboard I decided to also solder in optional 3mm LEDs for each key. These had to be unsoldered as well. 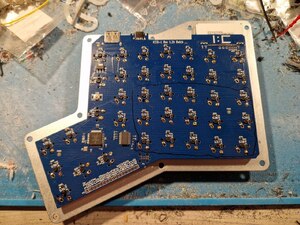 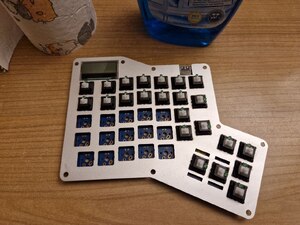 The next step was cleaning the Cherry MX switches themselves. This meant disassembling them, which is pretty easy. Just pry the two case halves apart, using a small flat screw driver to lift the locking tabs. Then I put everything in a soapy warm water bath. 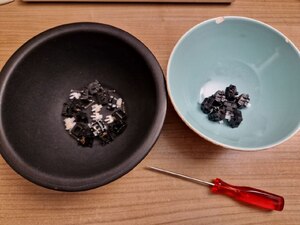 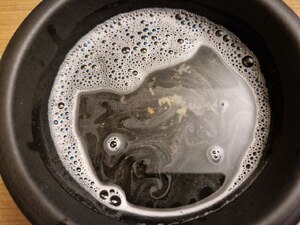 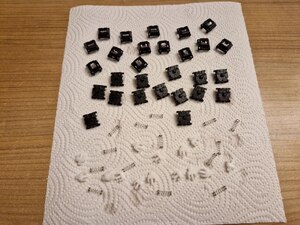 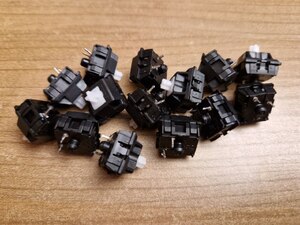 Now I was able to snap the switches back into the aluminium plate and solder them onto the PCB. I simply left out the LEDs out of lazyness. Removing them was kind of destructive and I don't really use them anyway. 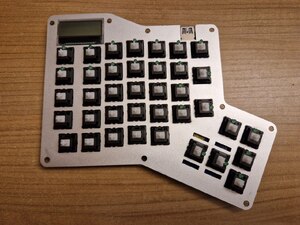 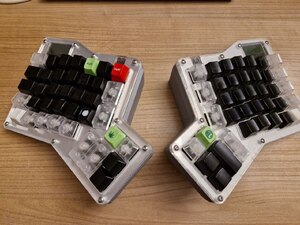 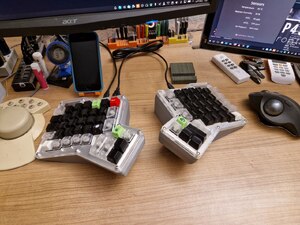 And after less than two hours my keyboard is finally back in action!

This time I connected the left half to my computer. I noticed that it was still flashed with my old Mac-style layout. Apparently I only flashed the right half back when I switched to Arch Linux. Fortunately I still had the binaries from my last build, so I simply flashed the left half and had my expected layout.

But I also noticed that I am no longer able to compile my old repo state, it fails with "multiple definitions" while linking. I will have to update to the current master of the upstream firmware sometime soon.