avrNetStack aims to be a very modular Networking Stack running on AVR Microcontrollers and supporting different Network Hardware (ENC28J60, MRF24WB). Select your MCU and hardware driver in the makefile. Compile with "make lib" to create a static library. Compile with "make test" to create a test hex file to use with the hardware found in Hardware/avrNetStack.sch. You need Eagle 6, available for free from cadsoft. In the future, a PCB will be designed that can act as WLAN / LAN Module for your AVR Project, in addition to this software. 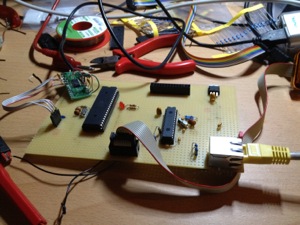 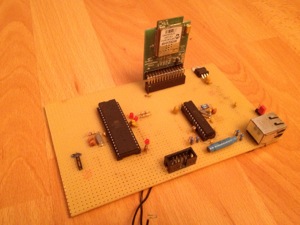 All files in "lib/drivers/asynclabs" are released under the GPLv2.

Everything else, if not mentioned otherwise elsewhere, is released under a BSD 2-Clause License. See the accompanying COPYING file.

This is a self-written driver for Microchips ENC28J60, based on it's datasheet and the silicon errata. It is operating (more or less) stable. The 8KB Buffer in the ENC28J60 is not really used, as all received Packets are placed in RAM before using their data. It will be used as FIFO for Packets that are received before the CPU is able to work on them. You can change the size and location of the Receive and Transmit Segments in the ENC28J60 SRAM.

This is based on Stefan Heeschs modified version of Asynclabs G2100 Driver, released in this forum thread, modified to work with this Networking Stack. This is a heavy work in progress.

avrNetStack includes UART, SPI and Timer libs aswell as a basic task switcher and scheduler. The UART lib uses FIFO Buffers for receiving and transmitting interrupt driven. Change the Buffer size in 'include/serial.h', if you want. For debugging, you can run the serial library in a blocking mode. The Time lib supports 16MHz and 20MHz on a small selection of hardware devices. If you get compile errors after changing the target plattform in the makefile, you have to extend these libraries to support your target. If you want to use the UART with your own software don't include another UART library. Use the functions from serial.h! You need to call scheduler() and tasks() in you main-loop and also enable interrupts to use the Networking Stack. Both are completely dynamic, so you can use them for your application logic, too. The std module is a wrapper for the libc memory allocation functions. It is used to keep track of memory allocations for debugging purposes.

Every software modules debug output can be individually turned off or on. Just set the "#define DEBUG" at the start of the file to 1' or higher. To add debug output, use debugPrint() to print. If you need some more code to generate your output, put it in a "#if DEBUG == 1 ... #endif" block. debug.h also includes a custom assert implementation.

Controls the operation of the whole network stack. It contains only one function for the main program, networkInit. It is to be called once afer System Reset and performs initialization of all necessary hardware and buffers, etc. Also, some definitions can be uncommented in the controller.h file to deactivate parts of the stack. This could allow you to run a subset of the stack on a smaller AVR.

These are the Network Hardware drivers. Different MAC implementations will exist in the future, right now only the ENC28J60 is supported. This allows sending Ethernet Packets, as well as receiving them. Received Packets are given to the appropriate next layer by the controller.

Handles received ARP Packets, maintains an ARP Cache and gives functions of higher layers a method to obtain a MAC Address from an IP Address. If the Cache has no hit, an ARP Packet is issued, so that the higher layer can try again later.

Handles received IPv4 Packets. Received valid Datagrams are given to the appropriate next stack layer. Also, IPv4 Packets can be transmitted with this module. It buffers outgoing IPv4 Packets to get the target MAC from the ARP Module automatically.

Handles received ICMP Packets. Can answer and send out echo requests. A single handler for echo replies can be registered. This is used to implement a simple Ping Utility in "test/main.c".

Handles the really simple User Datagram Protocol. A handler for every port can be registered and UDP packets can be transmitted.