...back to Flying RC Vehicles overview

At the end of 2017 I had to give in to the urge of building a bigger more powerful copter. After my first failed attempts with large copters, gaining some experience with smaller frames seemed useful. But I had built up some skills and was ready for the next step. So I built a 220mm frame copter with 2205 motors.

It has all the bells-and-whistles available at the time, like DShot, Betaflight OSD, Smartaudio, as well as S-Bus and Smartport for two-way communication. 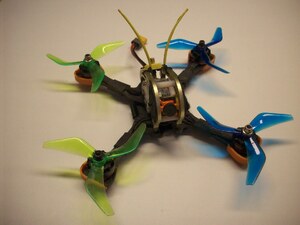 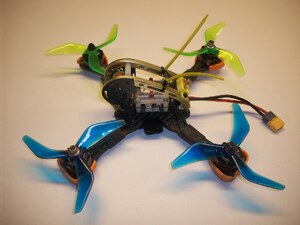 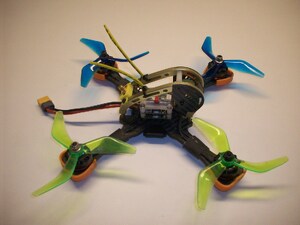 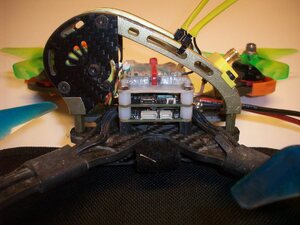 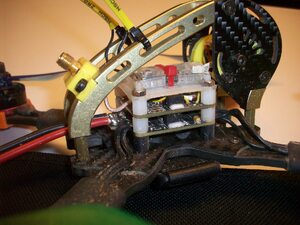 Here are some recordings of the FPV footage. Be aware that these videos are recorded from the received signal on the ground. Not only can you see lots of interference and other HF problems, the loss of quality from the video recorder and the YouTube encoding is also very noticeable. In real-life, the picture doesn't look that bad. Using a 3D printed baseplate, I mounted the FrSky Rx as the third/top level of the PCB stack. To fit in the VTx as well, I simply zip-tied it to the bottom side of this plate.

To protect the remote control antennas, I added two zip-ties to the cockpit frame, trimmed to the length of the antennas, and shrinkwrapped the antenna coax cables to the whole zip-tie. This works very well as crash protection, I never managed to destroy an antenna with this setup.

The VTx Antenna pigtail is comfortably mounted with a special 3D printed piece. This way, the 5.8GHz Antenna (I'm using a Padoga v2) can easily be changed after crashes and removed for transportation.

For the bottom most level of the PCB stack I used rubber vibration-insulating stand-offs. I'm not sure if they are really necessary, but they don't seem to hurt either. Everything else is mounted with rigid spacers.

These are the original prices I paid back when I initially bought the parts.

I have 3D printed the following parts for this copter: